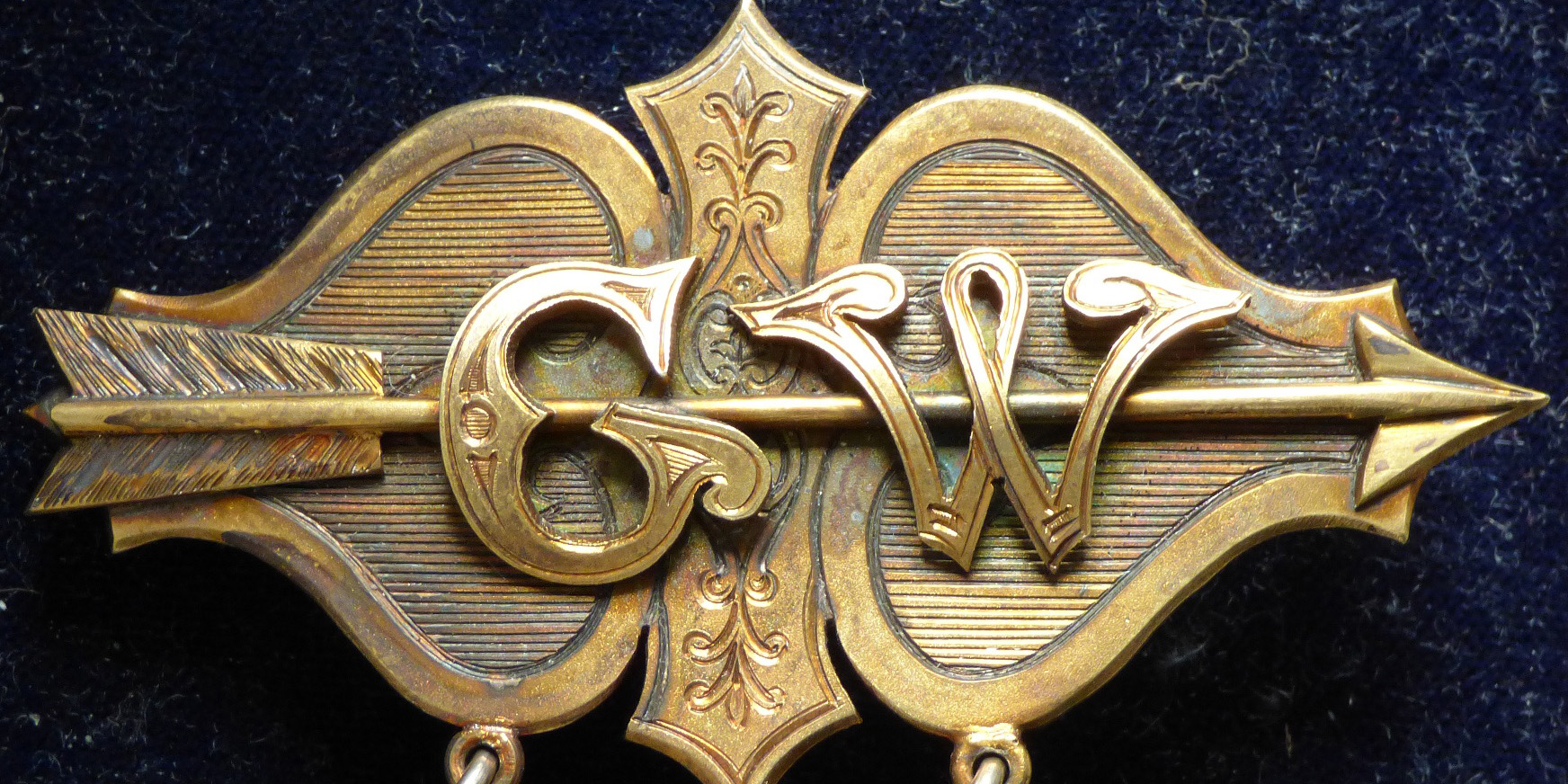 Mr. and Mrs. Thomas Dawson lived first at Allan Bank, Grasmere, but the climate did not suit his youngest daughter’s health, so about 1849 the family moved to Pitminster, a little village just outside Taunton. It was here that Mr. Dawson’s taste for archery was developed, he never gained much distinction as an archer but he played a large part in the foundation of the Grand Western Archery Meeting, the first of which was held which held at Bishops Hull (just outside Taunton) in 1861. Other Grand Western Meetings were held at Salisbury in 1862, Weymouth in 1863 and at Exeter in 1864; there was no Meeting in 1865 due to the Grand National Archery Meeting being held in Clifton but a Meeting was held in Weymouth in 1866. There was no Meeting held in 1867 and by 1868 both of the Dawson daughters were married and Mr. Dawson had left the area so Mr. Walrond took over the organising of the GWAM and continued to do so until 1914 – he died in June 1917. The original Grand Western Prize Badges were very probably organised by Thomas Dawson, he was friends with a Taunton silversmith – John Goodman (whose youngest son was named Thomas Dawson Goodman) – and samples of these early badges have Goodman’s mark, an interlinked ‘J’ and ‘G’.

Above is a picture of a Champions Badge, it would have had a bar hanging from the bottom with the meeting venue engraved on the front and the year on the back – the 1998 booklet produced for the 125th GWAM suggests that this dates from 1868 but there is a picture of the Reverend Hare wearing the badge with four bars, 1861, 62, 63 & 64, (it could, of course, been retrospective) but I seem to remember reading somewhere that the Champions badge was retained when the Prize Badges were stopped – because they were too similar to the Grand National Archery Meeting prize badges.

Below left is a picture of a Gentlemen’s Prize Badge from the very first Grand Western Meeting – this was reproduced on a smaller scale in a limited edition of 125 in 1998 to celebrate the 125th holding of the GWAM. The badge next to it is the Ladies Champion badge – this one dates from the 1864 GWAM so would have been won by Sophia Dawson, the hallmarks show it was assayed in Exeter in 1863/64 and has two of John Goodman’s marks (one as silversmith and one as the gilder). The final badge is actually a lesser award – this one was awarded in 1866 for 5th Gross Score and was won by Miss L. Butt of the Queen’s Royal St. Leonards Archers who was to become Sophia Dawson’s sister-in-law.

The Dawsons were members of the West Somerset Archery Society which was based in Batts Park, Taunton (now a housing estate!) The Dawson’s elder daughter, Sophia, was three times Championess of the West (1863, 1864 & 1866) and married William Butt who was the Secretary of the Royal Toxophilite Society (1865 – 72 & 1875 – 77). Thomas Dawson became a member of the Royal Toxophilite Society in 1864 and in 1867 issued (anonymously) a book (printed in Taunton) titled ‘A History of the Royal Toxophilite Society’ and in 1870 produced an enlarged edition. He was also a member of the ‘Queen’s Royal St. Leonard’s Archers’ and arranged for silver badges to be made for them by John Goodman (a receipt is in Hastings Museum and Art Gallery). Sophia Butt died in 1908 and her obituary in the ‘Archer’s Register’ (1909) was written by Henry Walrond, the 9th Marques de Vallado (a Spanish title bestowed on Humphrey Walrond by King Philip IV of Spain in 1653).